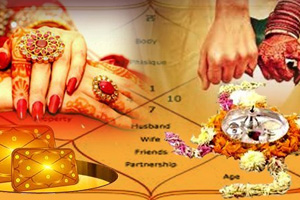 The similar position of the planet Mars from Moon in a native's chart is also detrimental to one's married life but up to a lesser extent. This placement of Mars in Twelfth, First, Fourth, Seventh or Eighth house from Moon is also known aqs CHANDRA MANGLIK. So in case compatibility the Placement of Mars is checked not only from Lagna but Moon also.

People having Manglik Dosha have a major break in relationship or the marriage is called off after engagement and some times they get married early and go through a divorce by the age of 28. In some cases this Mars delays their marriage beyond the age of 28. People who have Manglik dosha are prone to have more than one or even multiple marriages